A UFO, a Finish, and Owen

Just popping in to show my latest and final finish of the 'To the Beach' series by Hands on Design. 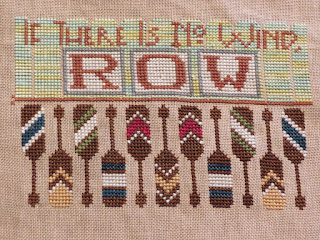 If you have the patterns, you will notice some color changes. I just wasn't feeling the cotton candy pink in this stitch. So, I went with a more burgundy. Then as I stitched that color, I felt it blended too much into the oar. Which caused me to change out the color on oars 4 and 8 to blue. And then there were those two yellow oars...the narrow strip of yellow wasn't charted at all. I wanted a bit more umpf to them than just the oar tips colored.

The pattern didn't specify how to stitch the 'fencing' behind the lettering. The photo showed the floss variations running up and down. I went with the side to side variation. After looking at this, I would say I should have stitched it up and down like the photo showed.

Will have to drag them all out and take a photo of the series all together. I wonder how well they will play together since I changed the coloring up. Crossing my fingers!

Now to the UFO. Pulled out the lighthouse. It's just massive. And when I ordered this to be converted from a photo to a stitch I stupidly asked for 90 colors. The lady doing the converting suggested 40. I so so so wish I had listened to her. The confetti stitching on this is terrible. But, I got what I asked for and there is no one to blame but little old me. 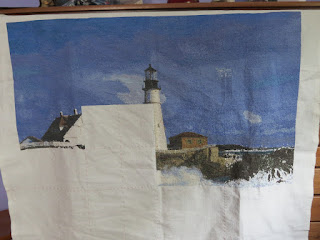 I worked on this a bit yesterday and filled in some on the roof. Today I hope to make some headway with all the filling in. The main body of the house is white and it is stitched. You just can't tell it. And there is fencing...it is a pain not fun.

DD and SIL took an evening and went out to eat and a bit of shopping. Guess who I got to see! 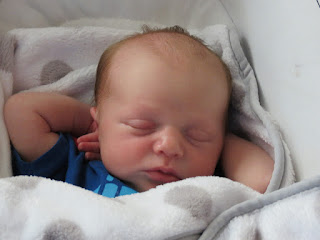 I just love how he throws his little arms up behind his head and relaxes. Not a care in the world as long as his belly is full and the diaper is not. The kids will be over this Sunday and I expect to get a few more pictures. You know, there just hasn't been enough photos taken of him yet. lol

Well, we are hurtling towards another weekend. After storms all week, I hope the weather clears long enough to get some pool time. But, I'll take the rain versus the heat being felt in so many parts of the country.

This is How it Begins!

Ok, Grandma mode is on today. May I present Mr. Owen James. 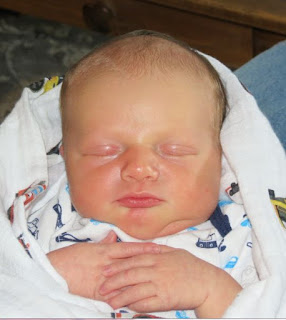 He arrived last Friday at 6:24p. Weighed 7lb 11oz., was 18.5" long and has brown hair and blue eyes. Owen really doesn't have this pronounced of a double chin. It's the way Grandpa is holding him.

Mommy and Daddy are doing well and splitting the nighttime duties. Doesn't seem to matter to Owen - he wants fed at 1 and 4 in the morning. DD told me even if the tank is topped off at 11p - Owen is up at 1 for more. Oh, and this kid has everyone wrapped around his finger.

And on the stitching front -

Finished this one this last Monday and am now about half way done with the last of the series. I changed up the colors. They should have been lighter and I just am not feeling these light floaty colors that don't pop off the fabric.

Hope everyone has a wonderful weekend. I am excited that DH will be home all weekend. His last job had him working 7 days and 12 hour shifts. This job is straight 8 and five days. The money isn't as good, but life will be better!