Our Bridget passed this morning. The hours have both passed so quickly and incredibly slowly. We are numb. She was an amazing part of our family and it is quiet with out her. No click, click, clicking from room to room. No snoozy naps on the footstool. No big brown eyes wanting your Cheetos, sandwich, chips, and pretty much anything you were eating.

Here are a few pictures from Christmas. 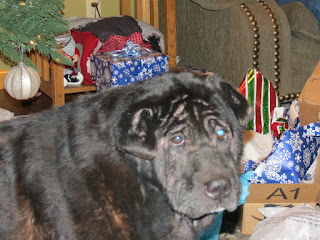 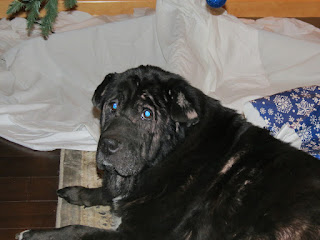 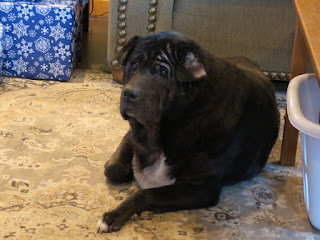 So many of you have had the never ending winter this year and I am insanely jealous! Here in the East Central Corridor of Ohio, we've had one snowfall before Christmas of 5" and then two other snowfalls of less than 2". That's it. A few flurries.

I heard California has places with 173% of normal snowfall on the ground. The East coast is bracing for their second blizzard in a week. The northern mid-west has been blanketed. What about us???

Our temps have been in the 50's and 60's setting records. We get rain. Oh, tons of rain. But, I want snow. Probably the only person in this town that wants snow. But, dang it -- it's still winter. I know, I know, be careful what you wish for. But, at this late date...I doubt if we get another snow fluffy this season.

On the stitchy side of life - I have a finish!

I should have had this one done several days if not two weeks ago. Things have been interesting around here and last night I was finally able to get the last few stitches in.

I then immediately started this one ~

Went shopping a few weeks ago. We have a new stitching store in the area (Canton, Oh). It's a small store. They have been there now for just over a year and are already adding on! It's called Little Creek Needleworks.

They have a weekly stitch-in on Thursdays. I hope to make it some day. I'm sure to stop by when I need that one floss I'm always running out of.

Well, I've delayed doing the mileage for our taxes long enough. Gotta get it done. bbbbooooo...