First, I would like to thank all of you for sending thoughts and prayers for my husband's family after his father's passing. Rob is doing as well as possible and has done the normal male denial thing...thrown himself into his work! This is the second weekend in a row that he is working. His only time off was Christmas Day. Sigh...if it works - whatever.

It seems time is passing quicker than I realized and the new year is around the corner. Which has had me thinking about next years stitching plans, our trip to BC Canada, our 25th anniversary, this blog, and everything I haven't shared. So, go get a cup of something yummy and sit down to hear what's been going on around here. btw - this post will be somewhat picture heavy!

So, should we begin with the grade school Christmas program Garin was in?

Oh my, it's been years since I have been to a school program. Some things haven't changed (too close seating - my knees were smashed into the seat in front of me) and yet I found myself seeing Courtney and Logan on the stage. Garin did well after Alivia yelled at him to wave to her. Until then, he was waving aimlessly trying to find us. :)

I'm still watching Alivia on Monday's to give Keri a bit of a break. She was over and we made cookies. 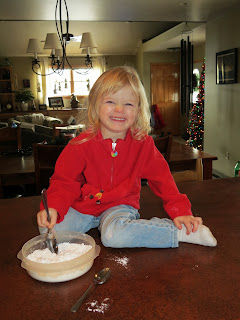 She insists on sitting on the bar to watch me. The cookies we were making needed to be rolled in powered sugar before baking. She decided to play in the sugar (and eat some too). What a ham! Look at that smile.

You can see a bit of the Christmas tree in the background - that's all you get. I was not a fan of this tree. Next year though -- I've got plans!

My Mathews' family get together had a weather related issue. Ice and snow! Some of the more northern relatives weren't able to make it and other's from town - well, we had a time related problem. Seems I never gave Karen a time to be here. Oops!

We ate well and had a crock pot hot chocolate. Only three of us managed to go shopping in Roscoe Village, but the weather had turned rainy by this time so off we went. I didn't buy anything but I was able to send Rob back for Christmas gifts! lol

We had family over on Christmas Eve and had a wonderful time.

I realized I didn't have any pictures of me with my aunt and uncle in ages. Problem solved! Lonnie is my uncle that I mentioned is battling cancer. He has finished his round of chemo and is awaiting the results from an upcoming CAT scan to tell us what his next step will be. We are hoping for a much cleaner scan than before!

Here are a few pictures from Christmas ~

A little explanation about the picture with the Reds. Our Christmas stockings tend to run amok some years. This year was the year for Red's Apple Ale for Andrew and Rob. I didn't want to forget them in the basement and so, I stuck them outside. Bad move...didn't know alcohol would freeze. What I didn't think about was the volume of alcohol per drink...lesson learned.

Now to the stitching. Wonder how many of you have made it this far? Like I said before I've been thinking about my 2014 stitching. I think this up coming year will be the year of Santa. I have several L*K Santas to go, there are several more Leisure Arts Santas I have the patterns for (read, a whole friggin' book of them), a set of 4 from JCS magazine last year, and another pattern for an all red collage of Santas. That should more than cover one year! But, I have 2 more patterns of the perpetual calendar to go and I want to do the Gettysburg Address. Maybe a should call it the year of Santa Almost. :)

Here are my latest finishes - 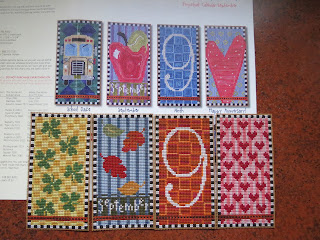 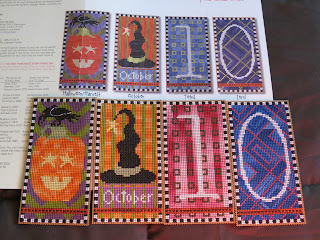 September had many changes and then the October pattern had only color changes. Go figure! November is another set that I have redesigned but December will have very little changes. I can't believe I am down to 8 more tags to go. Woohoo!

Time to go get my shower and get moving today. Many things to do to get the house ready for the new year. I follow the silly notion that how your house looks on New Year's is how it looks all year. I can NOT have it looking like this for the entire year.

Hope you have a safe and happy New Year! And happy belated Merry Christmas!
Denise
Posted by Denise at 11:07 AM 16 comments:

We just got word an hour ago that my
father-in-law has passed.

Please send a prayer for his family and my
husband in particular.
He's having a hard time with
loosing his best friend.