Time to Show Some Progress

Hello Everyone! Long time no see. That's my fault. Life has gotten busy and the internet and blogging haven't been on my to-do list. But, I have been stitching some.

You've seen Friday. Then there was the Second, and February, and then Happy Birthday. Finished the birthday cupcake last night. Wanted to show the pattern colors/designs and my changes. Going to use the heart from February for Mother's Day. Then I'm going to have to re-chart Father's Day and June completely. But, that's a way off.

Last time I blogged I told you I had some pictures from the bridesmaids dress trip.

I absolutely love Kilee in the top dress. Just about every dress fit her beautifully. But, she decided to go with a long dress as the other girls had chosen long ones. Sandra just couldn't find anything she liked. This was the last one she put on and it was great. Then there was Jess. She fell in love with the first dress she put on and didn't want to take it off. Since she hates dresses - this was amazing. Everything was set -- until it came time to pay. Then the cashier checked and found out that Jess' dress did not come in the color Courtney wanted. It was crushing. I must say she was a trooper and went out and found another dress very similar to the one shown. The dresses will be in truffle (for you and me - dark brown).

The other day Courtney was freaking out because the fiancee has decided he wants to make the boutonnieres for the guys and not wear flowers. He wants to use shot gun shells and other bullet casings. This goes with the theme of camo vests and ties. The entire wedding party hunts/shoots regularly. So it is not unexpected.

DH goes back to his normal job tomorrow after a hellish 3.5 weeks of 7/12's on second shift. I, on the other hand, am unhappy to have to share the bed. I sleep much better in the bed by myself. Now, don't get me wrong, I love him and want him home nights - I'd just be happier with a king bed.

It's finally time to have lunch and I think it should be corn on the cob. Yep, that sounds good with strawberries as dessert.

Have a great day -
Denise

Seems I have not posted in 17 days. To say I have been busy would be an understatement. Managed to stitch a bit and have three new finishes to add to my hare list.

Today we were at the bridal shop. The girls now have dresses. There was some drama when one girl's dress didn't come in the color we wanted. She was a trooper and found another dress. Courtney has decided to have the girls in brown and the guys are going to have camouflage vests/ties. Pictures will follow but not tonight - sorry.

My days have been filled with yard work. Tons of yard work. Last week found me mowing for 3.5 hours and this week it will be longer as Mom has decided I will mow more for her. She had her gall bladder out two weeks ago and the bouncing would not be a good thing. Today I tried trimming and managed to flood the trimmer - got all of 50' done. Oh well, tomorrow is another day. I even trimmed trees a few days ago! Turning into a gardener of sorts too - planted geraniums for the porch. Six hanging baskets and 8 planters.

Well, if I am to get any stitching done yet tonight I better get moving before bedtime sneaks up on me!
Take care, Denise
Posted by Denise at 10:04 PM 17 comments:

Baby, It's Cold Outside!

Not! Today the high is to reach 80 degrees. It's no longer winter. :( But, with this SAL it will be winter all year long. 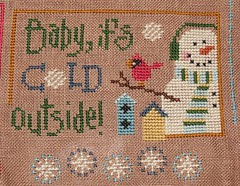 There's something about adding the snow to the top of the bird that I just don't like. Once again I have left it off. And that poor yellow birdhouse looks unfinished without its little button. 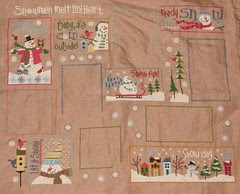 This piece is starting to fill out. Half way done! Hard to believe.

I should be outside mowing today - so I better get on it before the grass gets out of hand. Then I get to spray the yard with bleach water to kill any hook worms. Seems Bridget got them and it has caused us some long days and nights. Two more rounds of wormer and those pills - and then she should be feeling like her old self.

Have a wonderful May Day!
Denise
Posted by Denise at 9:30 AM 10 comments: