It's been awhile since I showed off Garin and Alivia. They were over last night while Mommy had a meeting and Daddy went to calling hours.

Looked through all the pictures from last night and she had her mouth hanging open in every one. And most of the time yelling. Don't you just love the jammies?
The weekend is upon us! Another week gone. Looks like weather outside (it's supposed to rain, blow, and snow - ha) No great plans - maybe lunch out and stop at Jo-Ann's to pick up floss. If I can talk dh into stopping at the big box store we can get paint and what not.
May today find you happy and healthy. And if the men (sorry Edgar) in your life are causing you stress - stitch on my friends!
Denise
Posted by Denise at 8:43 AM 9 comments:

Before Christmas Mary Jane and I were talking and it was decided that we would celebrate our Christmas together in mid-winter. Well, the time has come and the post office delivered. 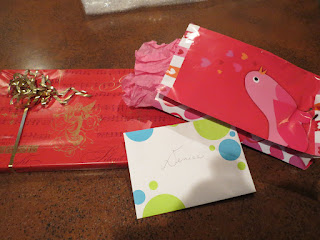 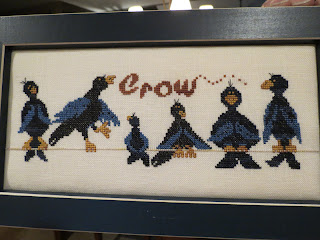 My murder of crows was not yet complete! I just absolutely love this 6-pack! The frame matches the blue perfectly and it's padded too! Her stitching just blows me off my feet - Thank you so very much! And the candy - haven't ever tried chocolate twizzlers. Thought I might get into them last night but DH had to have a Pepperidge Farm cake instead.

This stitch is already hanging proudly on my wall. Now for summer/fall to arrive so the rest of the flock can come visit!

I sent her a little bag -

As you can see I made three. One for myself, one for Mary Jane and another is winging it's way to its new home. I thought we three would enjoy having the same stitch. I kept the one with the mistake - my one deer is a bit longer than it should be and by the time I saw it - too late to change.
There were a few other things too but did I take a picture? Ah, no - oops.
Well, DH is sanding the trim on the windows and he's making quiet the mess and racket. Time to go see how much longer Bridget and I will be listening to the sander.
Have a wonderful and safe mid-week! The weekend is  but a few days away!
Denise
ps - The new blog header picture was taken by my mom. I believe she said it was a mill in West Virginia on the Blue Ridge Parkway.
Posted by Denise at 12:46 PM 7 comments:

Wish I Were Going to Cleveland Today!

There is a great stitching shop beside a bakery and the bakery is making paczkis today! I had my first about 2 years ago and it was heavenly. I've not made it back to have another - and this makes me sad. My hips on the other hand are cheering.

My mouth is watering at the very thought of the soft dough and chocolate filling. Rob's had a raspberry filling that he thought was okey dokey too! lol I can see me whining about going later today.

Time to get off the food train because I haven't had breakfast yet and getting all slobbery before breakfast is not the thing to do!

Switching gears - stitching! I have managed to finish all the stripes on One Nation and have gotten 27 states done. If I may offer anyone some advice on doing this pattern - go for a darker fabric that what is called for. When you lay the floss on this fabric you think, "Oh, the white really shows up!" No - it doesn't. I still think this looks washed out!

I have no idea why blogger turned this picture. And when I rotate it on my desktop - it rotates this image upside down. Go figure.

I'm trying to finish the entire left side and finish up the lower right quadrant last. As you can see - I'm loving the red and dragging my heels with the white.

Headed to the big box store yesterday to get paint and stuff. At the last moment - we changed our minds and got nothing but spackle. It's a start I guess.

Still thinking about those pastries. And now dinner - going to bake some skinless chicken with rosemary tonight. Shred it and add it to celery, carrots, a shallot, small onion, and homemade baked dumplings with lots of broth. Saw this on Diners, Dives, and Drive-Ins the other day - looks yummy too!

Hope this week finds you making dreams come true!
Denise
Posted by Denise at 9:16 AM 14 comments:

... I stitched! Hadn't picked up a needle and thread since Jan 30th. Last night I was determined to finish my stars! It was after midnight but I met my goal. 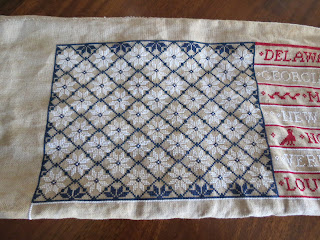 I did get a few other small projects finished. I'll show them later - they need to fly away first and I think I'm doing my shipping later this week.

The kids were over last night for dinner. They both love chicken parmesan and had asked for it for their birthdays last year.

We also attempted to foster a new pup this week. But, we found out quickly that we are a one dog house. I would like to publicly thank Angela (Indomitable Angela) for her advice and wisdom. She knows her pets! When we called the shelter to let them know we would not be keeping her permanently they asked for her to come back that night. She had really settled down and was learning the ropes around here. I hope she finds a family soon.

My genealogy project now has over 850 people. The growth is a bit slower now. I found myself spending hours per day typing info into my program, copying pictures, loading pictures, going through more pictures, calling my mom or MIL, and starting the research. I made myself stop and now allow myself an hour per day of research time and input. But, I'm back about 6 or 7 generations and things are getting sketchy - plus I'm back far enough they are arriving on the boats.

In the process I found out the 1940 Census will be released in about 80 days and volunteered to become an indexer for the familysearch.org website. I've been practicing and learning the last few days. Thought this project might be something to help keep my mind engaged until I decide about going back to work.

Rob and I have decided to do some DIY projects before Logan's graduation party. Then we realized we have less than 3 months to get finished. Hoping to power wash the porch and garage, put cladding on the porch posts, add handrails, new front steps, finish the trim inside, maybe repaint the public areas of the house, and get fans for the porch. Do you think we'll make it? lol

It's time that I move from the couch and start my day. Hmm, maybe this evening I'll even get to stitch more - Rob isn't going to be home tonight! And dinner will be left overs - woohoo.

Hope today finds you accomplishing everything you put your mind to!
Denise
Posted by Denise at 9:40 AM 17 comments:

Yep, that was the name of today's event! And the one word I can think of that fits...sinful!

Be warned - I am not liable for any keyboard drooling incidents. :) 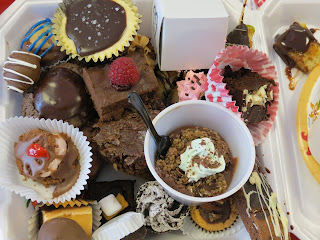 I have had the cookie on left middle of this picture. It was a nicely bodied chocolate cookie with a creamy cherry covered in dark chocolate topping. The little item on the other half of the box was a s'more like thing and I wasn't a fan. And the item in the cup was an all natural chocolate pudding. It did not taste like commercial pudding.

The ice cream in this  picture was called "Killer" and it was! The chocolate sauce with the brownie was somewhat sour and was a wonderful accompaniment to the brownie. 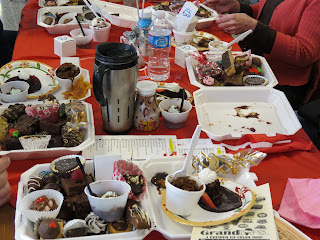 And this is 3 of 6 plates on our table. I bet there were 1 million calories between all the boxes. I will be freezing most of mine later. There is no way any one person should have this much sweet stuff in a few days let along in one.

As we were going through the line an auction of more foods/desserts began. I kept my head and hands down. What I needed - more food. My diet took a severe hit today and hasn't been doing too well anyway!

Today the weather man was off. The snow/rain line was to be at least 40 miles north of us and we were to have all rain all day. Oops - we got nearly 2" of snow that started melting immediately after it stopped snowing.

My stitching has suffered greatly this week. I started the family genealogy. Oh good golly - I have nearly 700 people in already and back to the 1700's. Thank goodness the Schupp, Furbay, Long, and Van Norman's all had someone put their branches together. Now, I must find the Brosius, Mathews, Steed, and John families.

Well, these genealogy papers are calling my name. I need to get busy on them. And then after I get all the records in the program - I get to add pictures. Again - oh good golly!