I've never changed the look on my blog so easily! This time there were no adjustments to the columns, no changing the text colors or the link colors, and everything looked good the first try! Geez - must be my day! ;0)

Thanksgiving went well - everyone was here early and we didn't have to wait on the bird too long. Mom wasn't happy with her pies - not enough cinnamon in the pumpkin and not enough corn starch in the chocolate. My noodles had issues but I completely blame the lack of my pasta roller! No fires with the deep fryer and no planning for Black Friday shopping.

Yesterday, I went full bore into Christmas. Even the stockings are hung by the fireplace with care...if I had a fireplace. Just a few more things to wrap up and the decorating will be finished. Next up cookies! 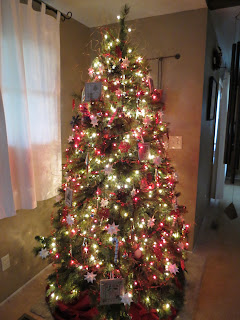 We've even got most of our holiday plans settled...Olgebay Park, The Nutcracker, The Candle Lighting at Roscoe Village, and JE Reeves Museum. I've already gone to see the trees at Warther's. I think the weekend of Dec 3rd is my only weekend still open.

I'm quite excited about all of the events but the Candle Lighting is hopefully a new tradition. As it stands all of the females on my dad's side of the family are going -- mom, my sister, DD, my aunt, a cousin, her DD, my other cousin's wife and daughter and myself. I don't know that we have ever ALL gotten together and done something. This should be an event! The plan is to start here having sandwiches and head off to see the caroling and watch the tree lighting. But, what I most want to happen is to have a picture of us all in front of the tree before we leave!

Today is the last OSU game and we are up against Michigan. Can the Buckeye's pull off another miracle like Wisconsin? That remains to be seen. If we were to win I think the Bucs would be bowl eligible - the next question would be will the NCAA allow them to go?

Well, everyone it's a wrap -- time to go start some laundry. Ha - gotta tell this quick. The other day the boy went to get into the shower and saw there were no clean towels in the bathroom. He headed to the washer/dryer hoping to find some. He called upstairs that there were no clean towels. I knew there was a basket down there. Here someone had kicked the clean basket of towels over to the dirty cloths side of the laundry area and the boy had piled dirty towels on top of the clean. Oops. Both the boy and DH had to dry off with hand towels. I kinda got a giggle out of that one.

Now, it really is a wrap - have a great weekend and I hope your laundry is done too! hehe
Denise
Posted by Denise at 8:48 AM 10 comments:

Just wanted to wish all a

Off to spend time in the kitchen preparing for the big family dinner!

Just in the 'Nick' of Time!

Yesterday I spent all day finishing my ornaments. I stand in awe of those of you who have the creativity to do amazing finishes. I was lucky to stretch the piece flat and get it centered. And to cut two pieces of foam core the same size - I mean really - is it that hard? 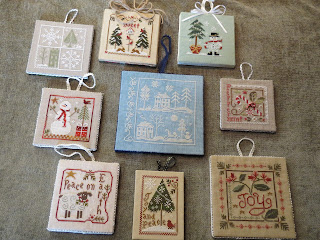 Wish I had some progress on Red Birds to show you. I don't think I have stitched since my last post. It's not that I don't want to - I just don't seem to have the time. BUT, my Christmas shopping is winding up and now it is time to wrap. And the tree goes up next weekend. And there are 11 people coming for Thanksgiving. And, and, and ... you know the drill...we do this every year!

Tonight is Garin's 5th birthday party at the bowling alley. This kid loves to bowl! And he's pretty good. I might take my camera - the little one is acting up and the big one isn't leaving the house yet. You know how it is with new toys! lol

Tomorrow is mattress shopping! Oh please let there be one we can agree on - please, please, please! And last grocery shopping before the big event. ick.

So sports fans - that is how my weekend is shaping up. What in store for you?
Denise
Posted by Denise at 8:36 AM 16 comments:

Opps -- I haven't been around much!

I may not have been around but I'm still round. lol Ok, yeah, that was horrible!

My mailman has been busy lately what with my internet shopping for Christmas. Today I thought she was bringing yet another box for the holidays. I was wrong. Miss CalamityJr (Mary Jane) spoiled me again. She has this idea - if I have surgery I get a gift. Now, who am I to complain?? I love that she is such a thoughtful friend!

I must show you what she sent! 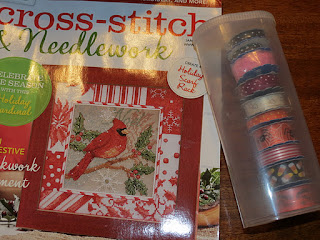 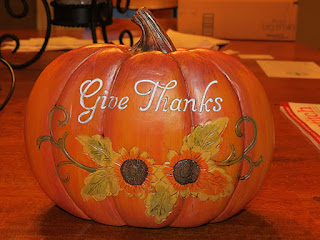 My very first Thanksgiving decoration! Hard to believe really. And the magazine and container too! The magazine has that cardinal piece that will look smashing beside my current project. But, there are two others in here that will be filling my winter stitching basket. 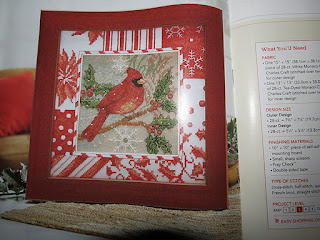 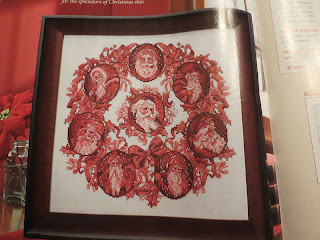 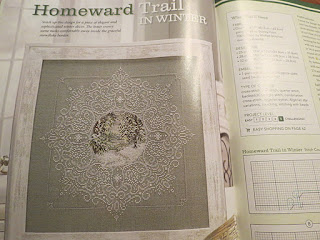 Gorgeous! I will be SO ready for next Christmas! (insert me going teeheehee behind my hand) That little container - she sent it empty thinking I might have buttons or bobs to fill it. Ha, I found these little ribbon reels and they fit perfectly. Now I don't have to search the bottom of my box for them!

I have made some progress on the cardinals...oops...Red Birds. 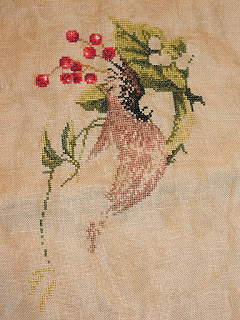 I got my new camera last Saturday. Still dealing with the learning curve. What needs to happen is that I sit down with the manual and camera and play.

Hope today finds you well and that you get time with a needle floss and fabric!
Denise
Posted by Denise at 6:09 PM 11 comments:

My baby boy is taking another step away from Mom. And yes, I am feeling rather blue about it. Not blue boohoo but just realizing the moment is here. Today is senior picture day. He has no interest in this and is ONLY complying because I have insisted. And I have promised dinner out afterwards. Food motivates him. lol


He told me some wonderful news last night  - he has been nominated for The Golden Key International Honour Society! Apparently he is in the top 15% of his college class! Can we all give him a big Woohoo!


Now for the ironic part of this - his high school refuses to accept him into the National Honor Society. He ranks #5 in his class, has been to the Honor Banquet 3 times (having a year round GPA of over 3.5 - he's in his senior year and this isn't awarded until May), been in sports, and has done a few community service events. I could make a few observations here but I think I'll pass.


On the stitching front -- I'm in sssssslllllllooooooowwwww motion. Finally realized why - I tend to stitch from the hours of 11-4. By that time I have showered, dressed, and done a few things to the house. Dinner is hours away and evening is for spending with DH. That's when I feel most comfortable stitching. But, DH's hours home are (wait for it) 11-4! His work hours are throwing my entire schedule off. That's my story and I'm sticking to it! lol


The weather is changing today and the wind is whistling outside. It sounds like winter. Brr! Not yet - I'm not ready! :(

Well, I should get moving. Things to do and all!
Denise

The Chi of Shaolin

This is what I saw last night!

And here's a video link - http://www.tusc.kent.edu/pac/chiofshaolin.cfm

Logan works as stage crew for the Performing Arts Center. He watched them practice Friday night and said of the entire set of actors only 3 spoke English. He said it was interesting trying to get the carts in the proper place when communication was bare minimum. The kid worked all day Friday and Saturday with the sets and working on the lighting.

If I caught the entire story line - it was about the redemption of a thief. The main character stole an item from a home and was hurt. He was then taken on a long journey to someone who could heal him. At that point the the thief met honorable men who trained him in their beliefs. The thief attained an honorable position and was given a sword that he promptly had stolen from him. He then went on a quest to get it back. After acquiring the sword again he returned to the home he had stolen from and returned the item.

What I found amazing about this entire production - not a word was spoken. Oh, there were sounds -drums beating, sticks being slapped in the floors, and music. But the women bent themselves in ways that would cause me to go to a chiropractor for months/years. The human body doesn't normally move like that! Wow!

The physical strength in the actors - beyond belief. After the show I went out and had them sign my program. After performing for 90 minutes none for them were sweating or even breathing heavy. Shoot - I'd STILL be laying on the floor sweating profusely and gasping for breath.

It was an amazing performance and I'm very thankful my sister asked me to go. Thank you Keri!

I have a poll on my sidebar - and I see there are some early shoppers like me. Once, many years ago, I had my shopping finished by Nov 14th. Ha, not going to make it this year! Not even close. I'm still researching my lists. That's where I'm headed next.

Nothing to report on the stitching front - between DH, the ball game, and the acrobats - I never saw a needle.  Thank you all for your wonderful comments about my start. Had to laugh - I may have to call the red birds - red blue jays. Too funny!

Here's to you having a wonderful day and plenty of stitching time!
Denise
Posted by Denise at 9:56 AM 7 comments:

See I Have Been Stitching

Just not much! But, finally I have something to show you. 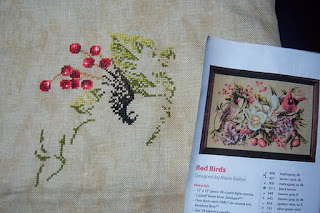 As you can see I did go with the Mocha fabric. I keep calling this Cardinals and I guess it's real name is Red Birds. Oops!

Felt I was starting to show some real progress but after looking at the picture - I have a long way to go.

Hard to believe the weekend is upon us. Actually have plans too! My sister won 4 tickets to the local Performing Arts Center - lucky her. Some acrobat show. That's tomorrow evening and going with Mom to a craft show in the afternoon.

Hope you have wonderful plans for the weekend and you are able to get lots of stitching finished!
Denise
Posted by Denise at 5:51 PM 13 comments:

Ah, the Brady Bunch songs have arrived on commercials.

Don't eat Honey Bunches of Oats - but now I want to - just to sing along. They got me hook, line, and sinker!

I know why Mom threw such a fit when I wanted her to buy me something because of the song they played on the commercial! lol

Alright, off to find an old Brady Bunch episode to watch.
Happy day to all -
Denise
Posted by Denise at 10:30 AM 1 comment: